Get a discount Now! Become a Member & Start Getting Exclusive Savings & Benefits OR log in if you are a member. 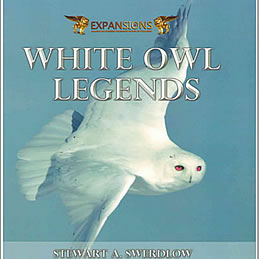 1947 was the first official sighting of 9 UFOs over Mount Rainier.

Agnes told Janet's father how she was "taken" to Mount Rainier and show highly evolved spiritual people. Agnes saw these people shot and the bullets pass right through them. Mount Rainier is an extremely sacred and spiritual place to the Indigenous Natives, thus a fitting background for Agnes' involvement with Chief White Owl, her own Indigenous Spiritual Guide.

In 1943, Chief White Owl began sharing the Sacred Legends with Agnes. She in turn shared these handwritten legends with Janet's father who them them to Janet, telling her that Agnes wanted them published someday.

When Janet met her future husband, Stewart A. Swerdlow, she gave him the manuscript to read. As soon as he held the Sacred Legends, he immediately connected to the Spirits of Agnes and Chief White Owl. They told Stewart that it was his duty to record their messages for those who are ready to hear the Archetypal Story of Creation.

There are no reviews yet.

Be the first to review “White Owl Legends” Cancel reply