Dr. Stewart A.  Swerdlow Interviews His Honorable Dr. Charles McWilliams, Grandmaster of the Sacred Medical Order of the Knights of Hope with fascinating news about how YOU can be adopted by the Boriken/Taino Indians of Puerto Rico, gaining further protection for Indigenous Medical Practices, getting the Healthcare YOU want and learning/teaching the way YOU want.

The Declaration on the Rights of Indigenous Peoples was adopted by the UN General Assembly on September 13,  2007.  SMOKH already provides protection under Monastic Medicine. Now, SMOKH offers another layer of Indigenous Medicine protection that you must know about.  Interested?

The post-Templar history, after the Pope’s Order closure of the Order 1312 AD, set out a legacy of stories, tales, folklore, and fables. What few recognize and history has suppressed is how the galant Knights Templar established a keen interest in ancient religions, adventure, science, alchemy, and metaphysics which birthed explosive movements variously called Rosicrucianism, Freemasonry, and others. We could say the Templar saga birthed spiritual and cultural movements which arose in Europe the year 1378 as being the birth year of “our Christian Father”. in the early 17th century after the publication of several texts which purported to announce the existence of a hitherto unknown esoteric order to the world and made seeking its knowledge attractive to many.  This hour lecture will unveil the mystery and debunk the Freemasonry myths, their false associations with the Illuminati, and how they were influenced by Rosicrucianism.

Suffice it to say it is a very long history and development with no easy captions, but “the Lodges” were part of the interest in alchemy and metaphysics, and its members practiced Rosicrucianism, Mesmerism, Magnetism, Swedenborganism and others. These movements spread to the Americas and effectively were associated if not started Puritanism, Christian Science, Theosophy, Veganism, and the New Thought movements which led to later interests in hygienics, naturopathy, yoga, shiatsu, and acupuncture. This is an untold history, carefully researched.

Sunday, September 30th, 9AM to NOON: From Kuiper Belt to Nevis …and Current Events + MORE

NOTE: This seminary for SMOKH members makes you eligible to join the Priory of the Knights of Christ (Templar). Certificate and Regalia will be conveyed at Investiture (2-5 PM St. James House of Prayer). 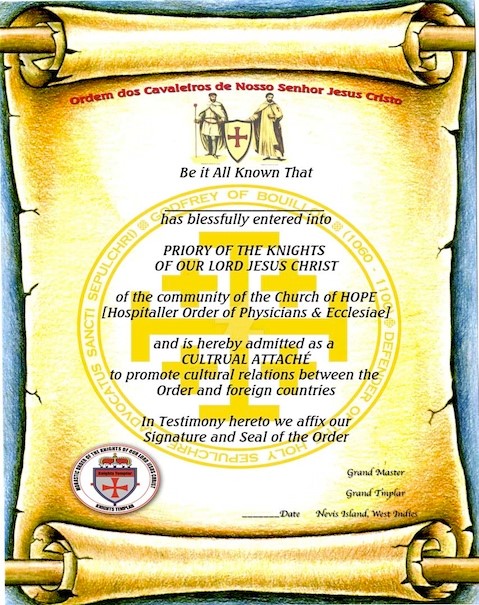 It will provide also credits for Ph.D. or D.A. (Doctor of Arts H.C.) in Medical History (Christian Hospitaller Orders) – to be announced.

Register at link below